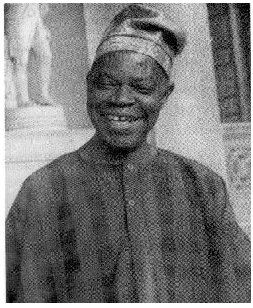 Amos Tutuola 1920-1997, Tutuola completed his first full-length book, The Palm-Wine Drinkard, within a few days. After he had written his first three books and become internationally famous, he joined the Nigerian Broadcasting Corporation in 1956 as a storekeeper in Ibadan, Western Nigeria. Tutuola became also one of the founders of Mbari Club, the writers’ and publishers’ organization. In 1979, he held a visiting research fellowship at the University of Ife (now Obafemi Awolowo University) at Ile-Ife, Nigeria, and in 1983 he was an associate of the International Writing Program at the University of Iowa. In retirement he divided his time between residences at Ibadan and Ago-Odo. Tutuola died at age 77 on June 8, 1997 from hypertension and diabetes.

Despite his short formal education (6 years in total) , Tutuola wrote his novels in English. His most famous novel, The Palm-Wine Drinkard and his Dead Palm-Wine Tapster in the Deads’ Town, was written in 1946, published in 1952 in London by Faber and Faber, and translated and published in Paris as L’Ivrogne dans la brousse by Raymond Queneau in 1953. The noted poet Dylan Thomas brought it to wide attention, calling it “brief, thronged, grisly and bewitching”. Although the book was praised in England and the United States, it faced severe criticism in Tutuola’s native Nigeria. Part of this criticism was due to his use of “broken English” and primitive style, which supposedly promote the Western stereotype of “African backwardness”. The Palm-Wine Drinkard was followed up by My Life in the Bush of Ghosts in 1954 and then several other books in which Tutuola continued to explore Yoruba traditions and folklore. Strangely the narrative of the Palm-Wine Drinkard refers back to The Bush of Ghosts several times even though the latter was written and published later. However, none of the subsequent works managed to match the success of The Palm Wine Drinkard. Many of Tutuola’s papers, letters, and holographic manuscripts have been collected at the Harry Ransom Humanities Research Center at the University of Texas, Austin