Queen Mother of Esigie, the ruler of Benin Kingdom in the early 1500s.
Esigie created the political title Iyoba to include her in his administration . Idia has been described as a valiant warrior. She is credited with Esigie’s successful conquest of the neighbouring Igala Kingdom. Her son built her a palace outside Benin and gave her territory over which to rule. In Bini oral tradition, Idia has several praise names,  such as “Idia ne ekonorhue” meaning “Idia, the womb of Orohue”
This Ivory carving of her face was adopted in 1977 as the emblem of the World Bank and African Festival of Arts and Culture
FOUR COPIES of the carving were taken from the private residence of Oba Ovoranmwen in 1897 by the British military force that invaded the capital of the Empire, Edo (now Benin City in Nigeria) during the “punitive expedition” and memories of the humiliation that the King suffered at the hands of the British (he was deposed and banished to Calabar) still evokes bitterness.
The carving is still the centrepiece of the African exhibition at the British Museum which attracts thousands of visitors each year.
One of the other three copies of the carving is now in the Metropolitan Museum in New York, another is in a private collection in California and the fourth is in the hands of an anonymous British collector.
When the Nigerian military government at the time (headed by Olusegun Obasanjo), made a formal request for the carving’s return . The British government bluntly refused, their reason….. The head of the conservation department at the Museum was of the opinion that “because of the condition of the object, it was unsafe to travel. The surface of the mask was cracked and it was thought that a sudden change in environment, from a cold climate to a suddenly hot one could worsen its state.” 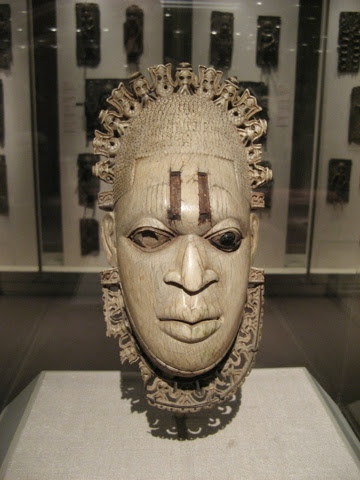