“Samuel Johnson (Anglican Priest and historian) believed that Oshogbo was founded in the time of Alafin Kori and he explains that the town was a military outpost of the Owa of Ilesha, intended to guard the frontier against the warlike Timi of Ede one of the generals of the Alafin of Oyo. This story in unlikely, however, because Oshogbo has a list of only 15 Obas (as of 1959) which hardly takes the town back to the time of Alafin Kori. Moreover the Ataoja does not seem to have been a military title, but rather a form of sacred kingship. Oshogbo tradition describes how the people moved from their home in Ibokun ( the original home of all the Ijeshas) and how they wondered about looking for a suitable site to settle. They tried various places, but invariably the water supply proved to be insufficient and they had to move on. Finally they came to the river Oshun. The Ataoja first tried to build his palace on the bank of the river , where the Oshun shrine stands today. But the goddess of the river appeared and objected. She pointed out the site of the present Afin (palace) to him and ordered him to build there.
The Ataoja and the goddess made a pact. Oshun promised to protect the town and the Ataoja promised to worship annually at the river bank. To this very day the site where Ataoja first sat down on the river bank is marked. Where he intended to build his palace, there is now an important shrine to Oshun, and in this sacred grove no fish may be caught” Ulli Beier  from his article Portrait Of A Yoruba Town 1959 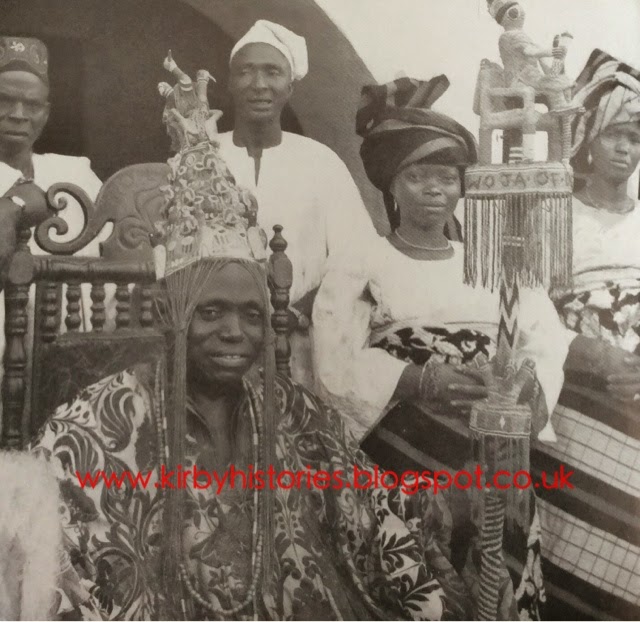