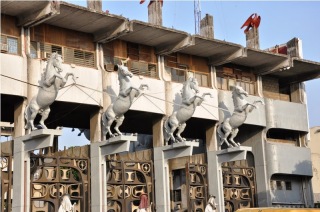 Like her heroes and heroines, Nigeria hardly pays attention to her pre-independence landmarks and monuments, writes ABIODUN BELLO

Nigeria, even before it gained Independence on October 1, 1960, had a lot of expectations. At Independence, the country was expected to take the lead on the continent of Africa and show the direction to other countries in economy, politics, technology, etc. The country is regarded as the giant of Africa; not only because of its size but also because of its natural and human endowments. Nigeria, with estimated 170 million people, has the largest concentration of blacks in the world.
Today, Nigeria has some of the best brains in almost all areas of human endeavour – technology, business, politics, sports, arts, entertainment, etc. While many countries of the world waged wars to gain independence, Nigeria got its own through intellectual struggle championed by people such as the late sage, Chief Obafemi Awolowo, the first indigenous Governor-General, the late Nnamdi Azikiwe, the late Sardauna of Sokoto, Ahmadu Bello, the late Prime Minister Abubakar Tafawa Balewa, the late Joseph Tarka and the late Antony Enahoro.
The list is inexhaustible. Many others who played prominent roles in the struggle for Independence actually died unsung. The country also had some monuments and landmarks, which predated the independence. But like the country treated its Independence heroes and heroines, most of these monuments today exist in name only.
Some of these pre-independence monuments are the Race Course later renamed Tafawa Balewa Square (TBS) after the late Prime Minister, the National Museum, Rowe Park, Tinubu Square, King George V Stadium, which was later renamed Onikan Stadium, among numerous others. The TBS is situated in the heart of Lagos Island, the commercial nerve centre of the country. It is surrounded by imposing structures and memorials. It has an imposing entrance gate with four giant white horses and seven red eagles on top of the gate.
There are many other buildings bordering the square. The structures bordering the square include the once tallest building in the country, the 26-storey Independence House, and the Remembrance Arcade, housing memorials of those who fought in the World War 1 (WWI), World War 2 (WWII) and the Nigerian Civil War. It has continued to host many events of national importance. One of the most important and probably the first was the hosting of activities marking the country’s Independence from Britain in 1960.
On October 1, 1960, it was at the TBS, then known as Race Course, where the Prime Minister, Tafawa Balewa, announced Nigeria’s Independence. Probably the most important guest at the event was Princess Alexandra who represented Queen Elizabeth of England. A Lagos resident, Mr. Sunday Showunmi, said the TBS was named Race Course in those days because it was where dignitaries used to place bets on horses.
It now hosts events such as the Eyo masquerade, trade fairs, etc. A few metres from the square is the National Museum, housing the bullet-ridden Mercedes Benz in which the former Head of State, Murtala Ramat Muhammed, was assassinated on February 13, 1976. The museum also hosts the Benin City brasses, traditional ivory carvings, royal crowns and the Nok Terracottas, regarded as some of the world’s most ancient artworks. The National Museum was established in March 1957 through the efforts of Kenneth Murray. It is regarded as the flagship of the country’s 34 museums.
It is designed to collect, preserve and exhibit the country’s vast cultural heritage. Another national monument in the area is the Onikan Stadium, which is a multi-purpose stadium. The 5,000-capacity stadium, according to Wikipedia, was originally built in 1930 and named after King George V six years later.
Onikan, which is Nigeria’s oldest stadium, was in the past home to many football clubs, notable among them were the Stationery Stores, First Bank and Julius Berger. Between 1963 and 1973, the stadium was known as the Lagos City Stadium before it metamorphosed into Onikan Stadium. Another important pre-independence landmark is the Tinubu Square on the Lagos Island.
The square represents the past beauty of Lagos. “Tinubu Square was a beauty to behold. Although it has been renovated many times by the Lagos State Government, it can never be like the original. “In those days in the late 1960s and early 70s, it was a place many people, young or old, used as a relaxation centre. “In the evenings, we always go there to relax.
Then we always watch those returning from office. They usually ride bicycles; they always present a spectacular view,” Showunmi added. According to him, the square used to have a fountain, which was functioning. Perhaps one of the most important national monuments in Lagos is the Rowe Park, now Mobolaji Johnson Sports Centre, named after the first military governor of Lagos State.
It is located in the Yaba area of Lagos. Rowe Park is a sports centre that has three major components – the indoor sports hall, outdoor sports centre and the swimming pool. The indoor sports hall hosts sporting activities such as table tennis, boxing, basketball, judo, taekwondo, etc. the outdoor sports centre houses basketball court, lawn tennis court, volleyball court, etc. It is perhaps noted for its swimming pool.
It also hosts the first and longest running privatelysponsored table tennis tournament – the Asoju Oba Cup. The park, like many other monuments, has been rehabilitated and still plays host to many events of national importance. For instance, this year, it hosted the 64th edition of JK Randle Swimming Classics. Many of these pre-independence monuments have lost their relevance because of years of neglect.