He is the father of the current Senate President Bukola Saraki. 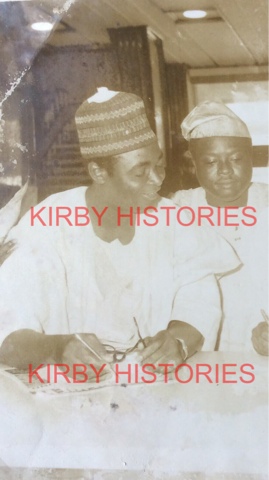 Like Loading...
June 2, 2015.Reading time 3 minutes.
https://www.youtube.com/embed/pxquqbzu9aA?feature=player_embedded
June 1964: Dr. V. L. Allen, British sociologist, historian, economist and Professor at the University of Leeds, whilst on a visit to Nigeria, was arrested and formally charged at the Lagos Chief Magistrate’s Court under Section 63 of the Nigerian Criminal Code, with the offence of managing / assisting in the management of an unlawful society.
In 1999 the left-wing academic, was formally unmasked as a spy in the unfolding Cold War scandal, but denied acting illegally or betraying his country as he considered what he did was perfectly legitimate because he belonged to a pro-Soviet, pro-East German faction of the group.
He told BBC Two’s The Spying Game: “I have no shame. I feel no regrets about that at all. My only regret is that we didn’t succeed.”
Dr Allen died on 26 October 2014, aged 91.
The Video
The Video is of scenes from outside a Lagos, Nigerian court.
He had also been accused of being involved in a coup that tried, but failed, to take over the Nigerian government.
Background
There was on going strikes between 1963 and 1964 regarding The national minimum wage and as admitted by some members there was a deliberate  attempt to overthrow the government and transform the strike into a full scale revolution. (article from Vanguard August 12 2012)
For this, two radical trade unionists Jonas Abam of the Dockworkers Union  and Sidi Khayam of the Seamen Union, along with Comrade Adebayo, a teacher and Victor Lenard Allen an Irish and lecturer from Oxford University were arrested and tried.
While out on bail, an elaborate plan was hatched to smuggle Allen out of the country.
He was disguised and went all the way to Idi-Iroko, a border area with neighbouring Benin Republic. Unknown to the revolutionaries, the state security agents were involved in the ‘plan’. They simply picked him up at the border.
The unionists were tried and convicted.
The Labour Movement distanced itself from the conspirators who during their trial got assistance mainly from outside Labour. This was to affect the unity of the Nigeria Labour Congress, NLC, in later years when Abam became the Genral Secretary of the powerfull Dock Workers Union, DUN.
The two men in the video (00:08) are Sidi Khayam and Comrade Adebayo. Khayam later fell sick and died while Comrade Adebayo left home for a walk and was never seen again.